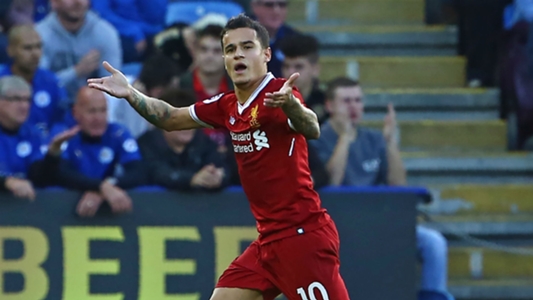 Coutinho set up Mohamed Salah for the opener and then scored a stunning free-kick, his first goal for the Reds since they snubbed Barcelona’s advances for the forward in the transfer window.

And Liverpool captain Henderson – whose side held off a Foxes fightback as Jamie Vardy had a late penalty saved – believes the 25-year-old showed why it was so vital to retain his services.

“He’s a fantastic player, he produces magical things at crucial times in the game,” Henderson told BT Sport . “You see that [in this game].

“He was brilliant in midweek and he’s been brilliant since he has come back in. Hopefully he can keep going for the rest of this season.”

Henderson acknowledged there is still room for improvement for Liverpool, who ended a four-match winless run in all competitions.

“We dug in right until the end, showed great character to see the game out,” he said. “I think we can do better, but it is still an improvement.

“I felt like we defended well for the majority of the game – obviously Simon [Mignolet] made a brilliant save from the penalty.

“We played some brilliant stuff, especially in the first half, and we were two goals up, which we deserved. Overall, we’ll be delighted with the result in the end as well as the performance.”

Simon Mignolet conceded and then saved Vardy’s spot-kick, but he was more concerned with the team’s fortunes than his personal achievements.

“The main thing is that we win the game. Sometimes even when you save a penalty, it doesn’t happen,” he said. “The most important thing is that the lads fought well.

“They deserved three points and that’s the most important thing.”

He added, when asked of his excellent penalty record: “I count points. That’s far more important. The team is always the important one.”