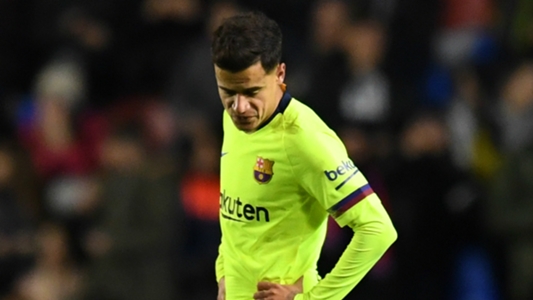 Coutinho started a domestic match for the first time since December 2 and converted an 85th-minute penalty as a much-changed Barca lost 2-1 at Levante in the first leg of their Copa del Rey last-16 tie.

The Brazil star’s goal – his first since the 5-1 crushing of Real Madrid in October – gave the holders reason for optimism ahead of next week’s return leg, having fallen two goals behind in the opening 18 minutes at Ciutat de Valencia.

Ousmane Dembele joined Coutinho in completing a full 90 minutes and the Blaugrana boss insisted he was satisfied with both players, while encouraging them to press for continued opportunities.

“When Dembele wasn’t playing, everyone was asking me about him,” Valverde told reporters.

“Now Dembele’s playing and Coutinho isn’t and the reverse is happening. When you do not play and you are not happy, you have to fight to change the situation. Today was a match for that.

“Coutinho is a great player who has given us a lot and will give us a lot. I will say the same about Dembele. It’s a repetitive question with interchangeable names.”

2 – Ernesto Valverde has lost two games at Ciutat de Valencia as Barcelona’s manager, more than any other stadium as visitor for the Catalonian team in all competitions: 4-5 in May 2018 in #LaLiga & 1-2 in January 2019 in Copa. Ghost pic.twitter.com/gkUkS6ztlP
— OptaJose (@OptaJose) January 10, 2019

Barca were without a host of regulars as Lionel Messi, Luis Suarez, Gerard Pique and Jordi Alba were all afforded a break amid a busy January schedule.

Valverde defended his team selection, insisting the injection of youngsters Juan Miranda and Chumi, along with new arrival Jeison Murillo, was a gamble worth taking.

“I picked the best team I thought we could pick,” the Spaniard said.

“It served us to evaluate players in some tough moments, like in a LaLiga game. I know it’s a risk, but you have to take risks a lot of the time.”