?I am ever so sorry to remind you of this, but exactly nine years ago today Frank Lampard scored his ‘ghost goal’ against Germany in the 2010 World Cup last-16.

Unless, of course, you’re German…or from anywhere other than England. In which case, this may have brought you unbridled joy.

For those wearing the flag of St. George, however, this is a rather painful memory. Fortunately, the misery can be shared! England were not the first football team to suffer a moment such as this and they certainly haven’t been the last. Yes, refereeing howlers litter the history of our sport and no one is safe.

Here’s a look at eight other goals that never were.

Clive Allen was the unlucky individual in this throwback, scoring the one of the finest ‘ghost goals’ that English football has ever witnessed.

Towering over a free-kick against Coventry City, the ?Crystal Palace forward looked in the mood for something spectacular and, well, it was no doubt quite the spectacle.

Allen unleashed a swerving bullet that rattled into the top corner of the Coventry goal, clattering off the stanchion and bobbling back out. He knew it was in from when the ball left his right boot, but the referee didn’t, even after it had flown into the net. Romania’s 1-0 defeat to Bulgaria in the group stages of Euro 1996 saw the former become the first country eliminated from the tournament, though they still have gripe about it.

They’re justified in their grumbling, too. Trailing to a mesmerising Hristo Stoichkov goal in the opening stages, the Romanian thought they had drawn level when

?Tottenham Hotspur and ?Manchester United were tied in deadlock as the clock ticked into the final minute of their ?Premier League encounter in 2005. Cue a 55-yard monster from Pedro Mendes.

The Portuguese’s cannon soared high into the sky, travelled half the length of the pitch and came hurtling down on top of Red Devils ‘keeper Roy Carroll.

Standing inside his own six-yard box, the shot-stopper lost his bottle at the vital moment, juggling the ball before accidentally spilling it over his own goal line. It crossed the line comfortably, yet the whistle was nowhere to be heard.

Palace have been hard done by when it comes to goal line decisions. They suffered a repeat of the Allen incident 29 years later, coach Neil Warnock 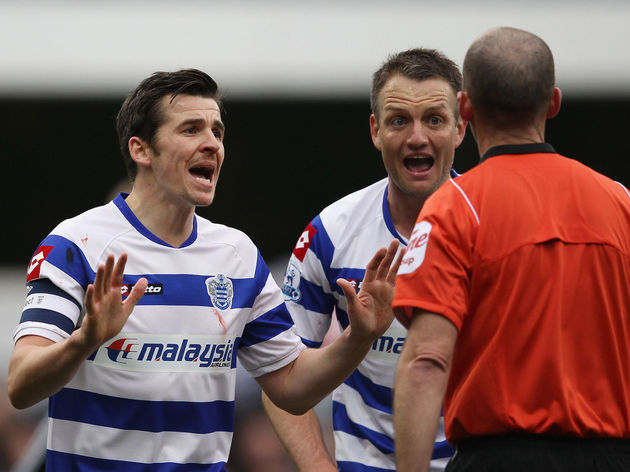 In their relegation six-pointer back in 2012, ?Bolton Wanderers and ?Queens Park Rangers both knew the winner of the late-season clash would give themselves a huge boost in the fight for survival.

With the game level, QPR defender Clint Hill got on the end of a tantalising delivery, powering a header into the goal, only for Trotters ‘keeper Adam Bogdan to palm it out to safety.

It’s hard to say if this one is more or less controversial than the others. It was one of the most obvious errors, yet the corner from which it came was also mistakenly given – Bolton should have had a goal-kick, so it evened itself out?

Either way, the result proved inconsequential – though it did cause the FA to call for new technology in the sport – the Wanderers 2-1 victory failing to save them from demotion to the ?Championship. Leading Juventus by a single score, then-champions of Italy Milan appeared to take an enormous step towards defending their title by doubling their advantage.

Sulley Muntari bundled an ugly effort in, though it was swiftly clawed away by Gianluigi Buffon, the Bianconeri going on to draw the match 1-1 and lift their first Scudetto since 2006. Sweet, sweet revenge came for England two years after Lampard’s sterling strike in Bloemfontein as Ukraine were wrongly denied a leveller against Roy Hodgson’s men at their own European Championships.

Does it count as revenge if it doesn’t happen versus the Germans? We’ll take it, I guess. Skipper John Terry was the hero/villain of the night, depending upon your allegiances.

Early on in their 2017 ?La Liga meeting, Valencia and ?Barcelona witnessed a shocking decision from the referee, with Lionel Messi’s effort wrongly ruled out.

The Argentine hit a masterful, first-time drive towards Neto, who allowed the ball to slip through his grasp and trickle behind the line. Every Blaugrana player complained, but it was to no avail.

It would take a late Jordi Alba strike to snatch a draw for the Catalans, though they still went on to win the Spanish title that year.