Some players simply cannot be replaced and Andres Iniesta falls into that category.

The 33-year-old midfielder announced recently that he will leave Barcelona at the end of the season, having spent his entire career at the Catalan club. And he will be sorely missed.

Before kick-off in Barca’s rearranged league fixture on Wednesday, Iniesta was presented by a ceramic yellow submarine in a lovely gesture of respect by the visiting team. But he still sank Villarreal with some sublime stuff en route to an emphatic 5-1 win.

The World Cup-winning midfielder conjured up two astonishing pieces of skill from his very special box of tricks – the first, a delightful threaded pass for Lucas Digne, who squared for Paulinho to tap home; the second, a delightful chipped pass to set up Lionel Messi for Barca’s third goal.

He came close to scoring himself, too, firing just wide from a Messi ball after the Argentine had returned the compliment. And as so many times before, the Camp Nou chanted his name.

As he left the famous field for the penultimate time in a Barca shirt, he was given a rousing ovation by the Camp Nou crowd. There is one more match left for those fans to marvel at his talent – against Real Sociedad on the final day of the season. And then it will be all over.

But as Iniesta departs, with a move to China or Japan still likely despite denials this week, there is also reason for optimism for Barca following the impressive performances of both Philippe Coutinho and Ousmane Dembele on Wednesday.

Dembele has hardly been trusted by Barca boss Ernesto Valverde this season, the French forward also enduring two spells on the sidelines through injury. But with La Liga wrapped up, he was given a chance against Villarreal and showed just what he can do. 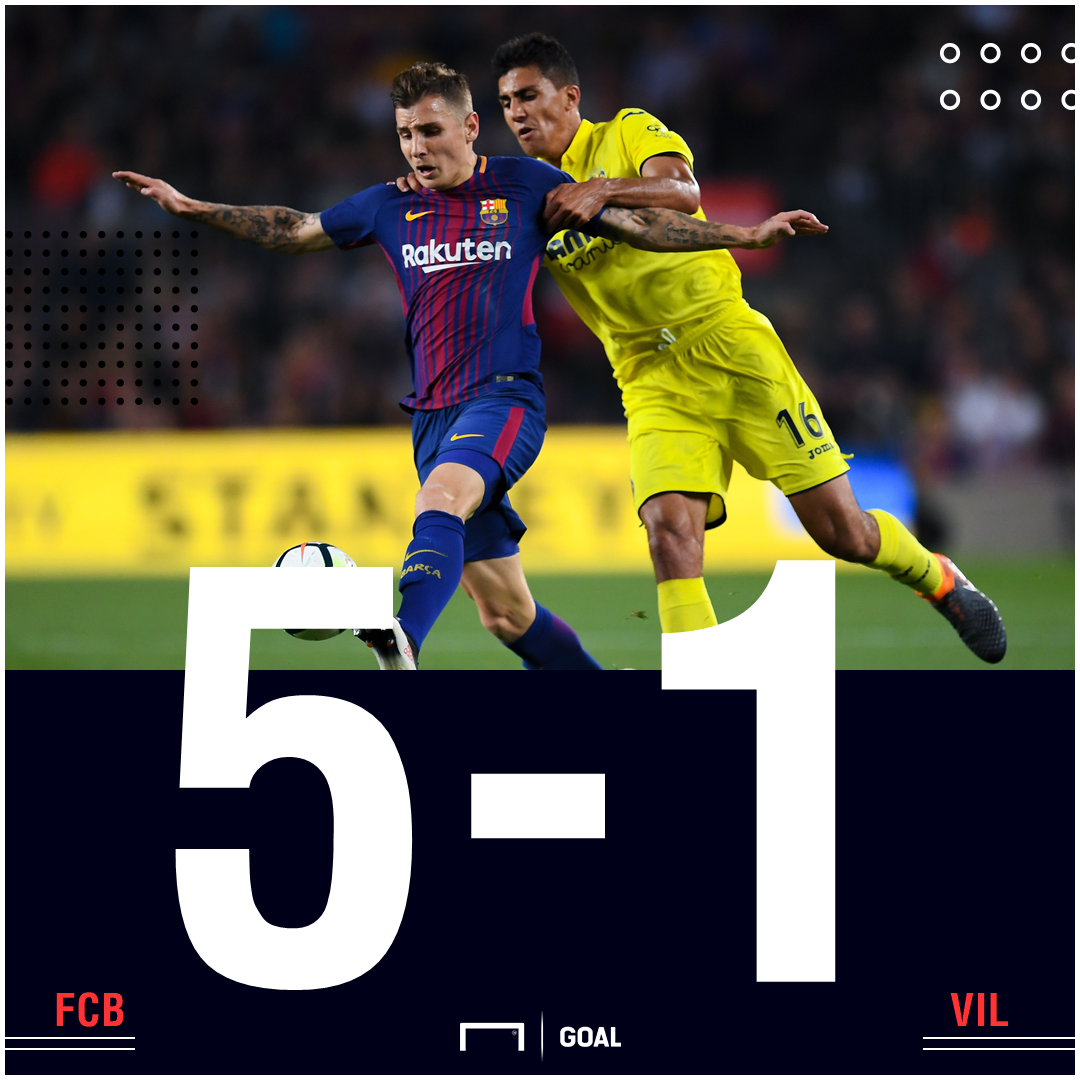 The 20-year-old went on a superb run in early in the game before fizzing a curling effort towards the far corner. And it brought a goal as Villarreal keeper Sergio Asenjo could only push the ball out as far as Coutinho, who slotted in from close range.

The Brazilian has now been directly involved in nine goals in his last 10 games for Barcelona in all competitions, with four goals and five assists, making light of some harsh criticism from former Juventus and Real Madrid coach Fabio Capello during Sunday’s Clasico clash, in which he was withdrawn after Sergi Roberto’s red card.

Coutinho was signed as a long-term replacement for Iniesta and he already looks like he will be a success story at the Catalan club.

Dembele, meanwhile, remains raw and gave the ball away carelessly at times. With age and talent on his side, however, he should be a real asset over time. 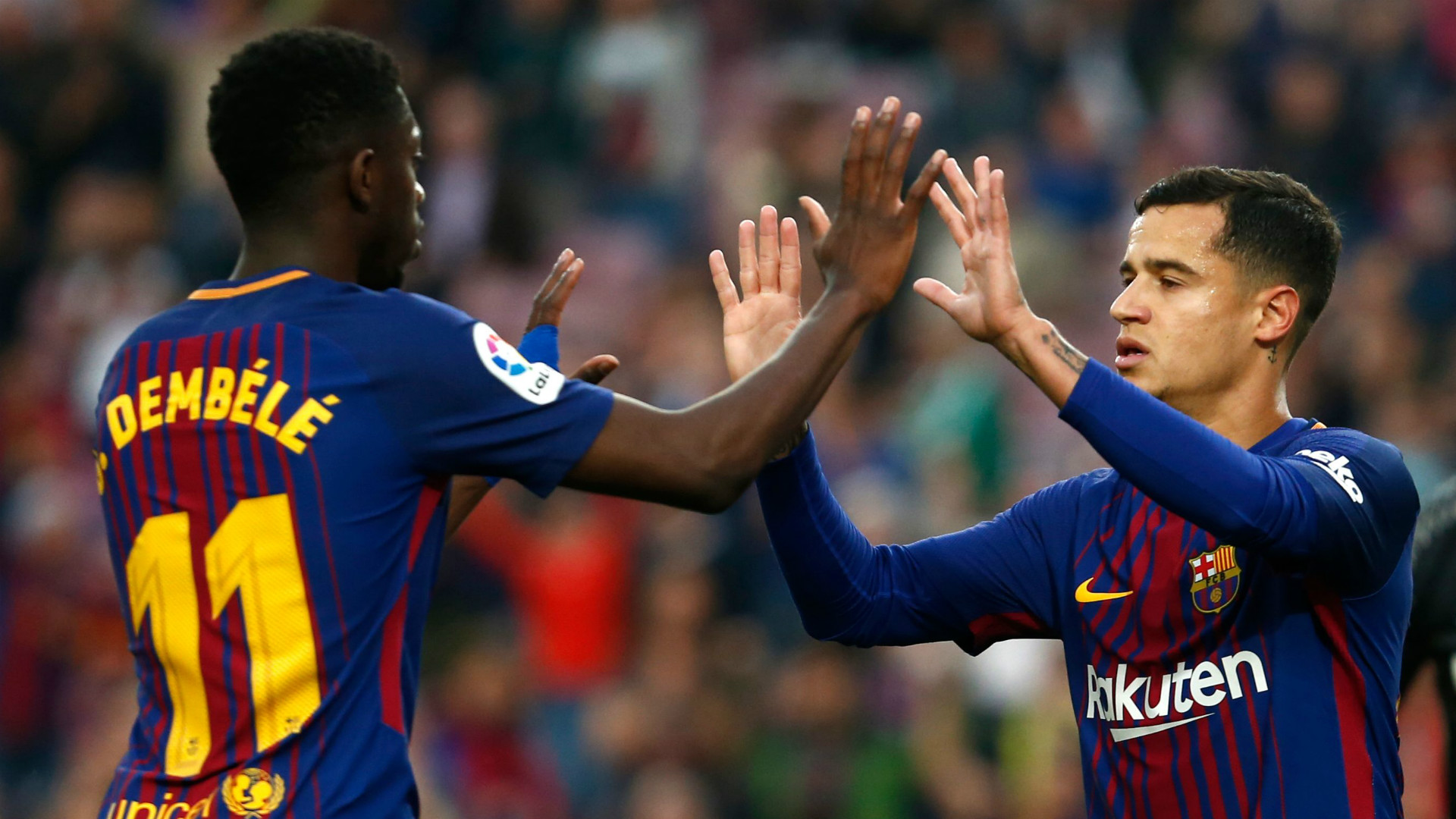 And he rounded off a happy night with two goals late in the game – the first from close range after some great play by Ivan Rakitic and the second a superb individual effort which saw him beat two rivals and dink the ball over Asenjo.

That showed just why rumours that he is on the market this summer are very much exaggerated. Barca know they have a talent on their hands, but the Blaugrana are keen for him to improve his work-rate and tactical discipline.

The Frenchman has now been directly involved in a goal once every 92.55 minutes for Barcelona across all competitions this season, with seven assists and four goals in his 1,018 minutes.

He, like Coutinho, is very much here to stay. It is just a crying shame that Iniesta is not.