Ousmane Dembele needed a night like this. In what has been a spectacular season for Barcelona, particularly in La Liga, the €105 million summer signing had been something of a disappointment. But on Saturday, he came of age.

Barca came into this match unbeaten in 27 games in the Primera Division in 2017-18 and had not lost at all in the league since last April against Malaga at La Rosaleda – a defeat that seriously harmed their hopes of winning the title in Luis Enrique’s last season.

This time around, the trip to Malaga seemed somewhat less daunting, the Andalusians rooted to the bottom of the table ahead of this match and without a win in any of their previous 10 league games.

However, it was made more difficult by the fact that Lionel Messi pulled out of Barca’s squad earlier in the day to be present with his wife Antonela Roccuzzo at the birth of the pair’s third son, Ciro.

In his absence and that of Andres Iniesta through injury, coach Ernesto Valverde picked both January signing Philippe Coutinho and summer acquisition Dembele behind Luis Suarez in a formation which was something of a 4-3-2-1 – closer to Barca’s traditional 4-3-3 than the 4-4-2 the Catalans have been using all season.

Barca did not seem to miss Messi much and Suarez opened the scoring with a fine header after a superb cross from Jordi Alba after 15 minutes. Dembele, meanwhile, grew in confidence as the game wore on.

The French forward featured in the Catalan Supercup against Espanyol on Wednesday night, but frustrated fans in the 0-0 draw – Barca later won on penalties – as he gave the ball away and saw some wayward attempts miss the target before being substituted after 63 minutes.

However, there were flashes of his skills and those were in full evidence on Saturday night as he beat defenders with pace and trickery, setting up Coutinho for the second goal in sumptuous style as he dragged the ball back and crossed for the Brazilian to finish with a clever back-heeled effort. 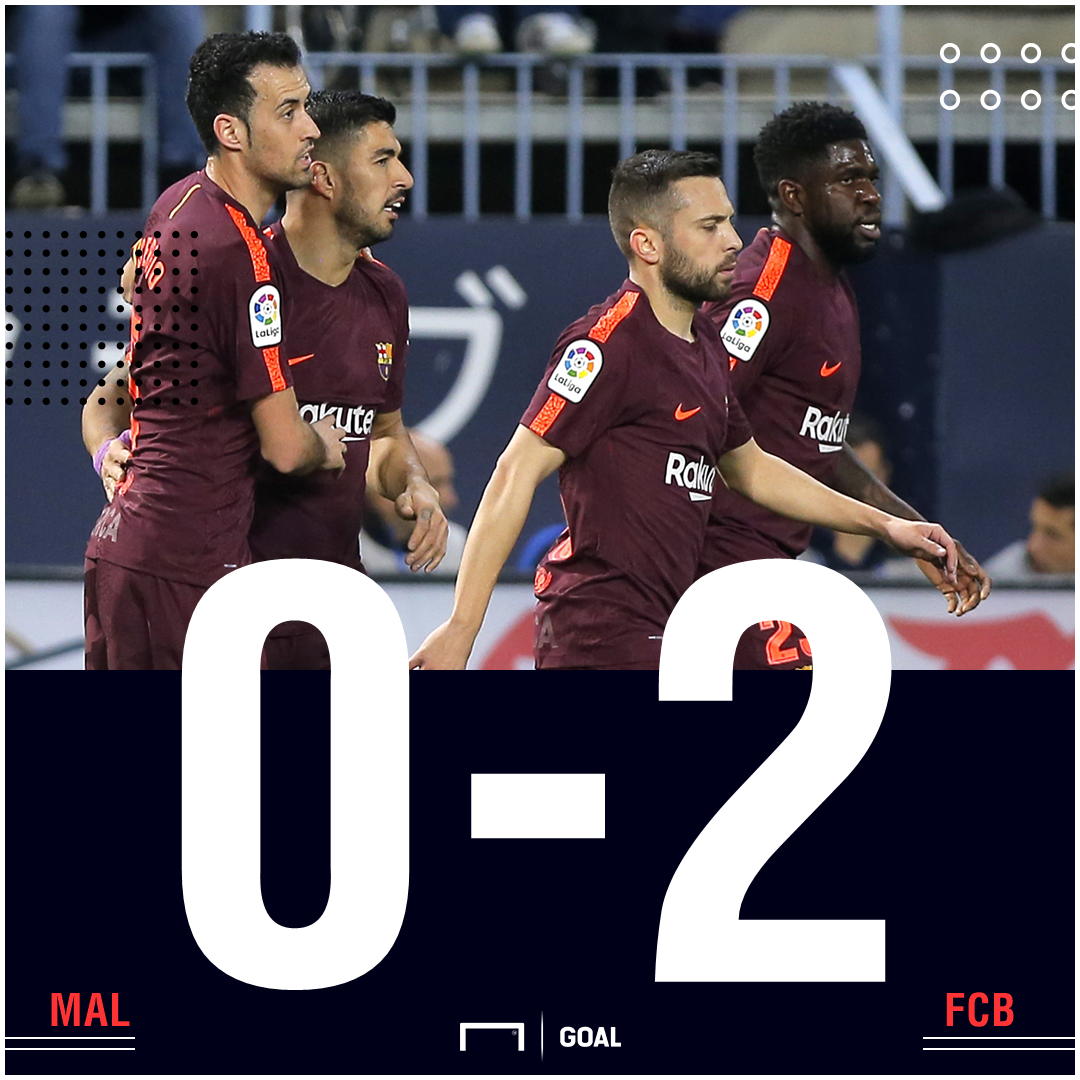 He also came close to scoring himself with a spectacular volley against a home side down to 10 men from the 30th minute after the dismissal of Samuel Garcia, while he exhibited his quality in another move featuring his close control as he deftly flicked the ball over a Malaga defender and sent in a cross that was eventually cleared.

Best of all, however, was his link-up play with the midfield and his fellow forwards. This was a much more mature performance from the 20-year-old and he showed some real promise in a campaign in which he has been blighted by two spells out through injury and some disappointing displays.

His beaming smile when he hugged Coutinho said it all and it was for such moments that Barca bought the winger from Borussia Dortmund for such a significant outlay in the first place. And Messi, watching with his growing family on television, will have been both impressed and delighted to see the youngster come of age.

On Wednesday, against Chelsea in the Champions League, the two of them could cause havoc together.