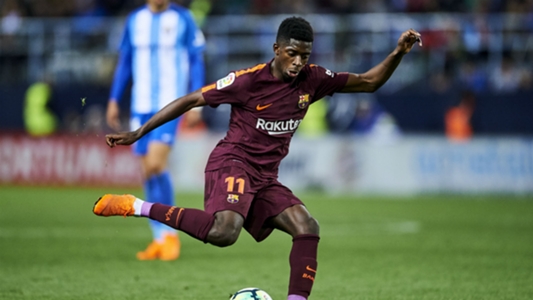 Philippe Coutinho credited Ousmane Dembele for helping to fill the void left by Lionel Messi as Barcelona cruised to a 2-0 win over 10-man Malaga in LaLiga.

Messi missed the game following the birth of his third son and first-half goals from Luis Suarez and Coutinho saw Ernesto Valverde’s men take control of the contest before Malaga winger Samu was sent off for a dreadful lunge on Jordi Alba.

Coutinho produced a wonderfully inventive backheel finish from Dembele’s 28th-minute pass and the France winger, whose first season in Spain has been ruined by injury, started to unfurl his full repertoire as the game went on.

“Leo is the best in the world so you will always miss him when he’s not there but something fabulous has happened in his life with his third son.

“We congratulate him and he will be there for his next game.”

Barca’s next outing is at home to Chelsea in midweek, with their Champions League last-16 tie all square at 1-1.

Coutinho denied his team-mates took his foot off the gas at Malaga with an eye on facing the reigning Premier League champions.

“Absolutely not,” he replied. “We’re trained to have the mentality of game by game at this club.

“Clearly we could have passed it better and used more of our possession. Now that we’ve won we can think about the next game.”