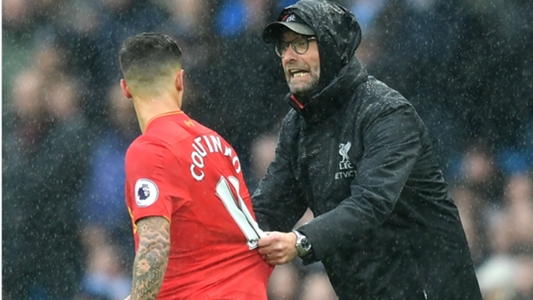 Jurgen Klopp conceded Philippe Coutinho made it known to everyone, including his team-mates, that he wished to leave Liverpool to join Barcelona, making it impossible to keep him at Anfield any longer.

The Brazil star’s imminent switch to Camp Nou was announced on Saturday, the 25-year-old agreeing a five-and-a-half-year deal and moving for a reported fee of €160 million, while his Barcelona release clause has been set at €400m.

Coutinho had long been a target for the La Liga giants, who were rebuffed several times in their attempts to sign him back in July and August.

Having handed in a transfer request, the attacker was always on borrowed time at Anfield and Klopp was disappointed to see him finally leave. However the manager saw no choice over the matter as Coutinho told him, the club’s owners and even his own team-mates that he wished to depart.

“It is with great reluctance that we – as a team and club – prepare to say farewell to a good friend, a wonderful person and a fantastic player in Philippe Coutinho,” he told the Liverpool’s official website.

“It is no secret that Philippe has wanted this move to happen since July, when Barcelona first made their interest known.

“Philippe was insistent with me, the owners and even his team-mates this was a move he was desperate to make happen.

Jürgen Klopp offered his reaction to the news #LFC have today reached an agreement with @FCBarcelona for the transfer of Philippe Coutinho: https://t.co/9y0KtnWHpj pic.twitter.com/XVin5CIjH5
— Liverpool FC (@LFC) January 6, 2018

“Despite that, we managed to keep the player here beyond the summer window, hoping that we would be able to persuade him to stay and be part of what we are looking to do.

“I can tell the Liverpool supporters that we, as a club, have done everything within our means to convince Philippe that remaining part of LFC was as attractive as moving to Spain, but he is 100 per cent certain his future – and that of his family – belongs at Barcelona.

“It is his dream and I am now convinced there is nothing left at our disposal to change his mind.”

Coutinho moved to Merseyside in 2013 and went on to make 152 Premier League appearances, netting 41 goals, with Klopp lauding his input.

“Philippe has made a fantastic contribution to this club over his five years of service and as disappointed as we are he doesn’t want to extend that, the relationship we have for him means with a heavy heart we wish him well,” added the German.

“The player remained dedicated and committed to helping us win matches, producing good performances and training hard each day at Melwood after the summer window had closed, despite failing to convince us to allow him to leave during that period and that level of professionalism reflects positively on him.”

Klopp conceded the news would come as a blow to Reds supporters, who have seen other favourites lured away by big-spending suitors, including Fernando Torres and current Barca hero Luis Suarez.

But he urged the Anfield faithful to remain upbeat about Liverpool’s prospects, with Klopp’s team in the top four of the league and through to the last 16 of the Champions League, having also progressed in the FA Cup at rivals Everton’s expense on Friday.

“Of course, it is totally understandable that supporters will be disappointed; this is always the case when you have to say goodbye to someone special,” said the former Borussia Dortmund boss.

“But, as hard as it is sometimes to accept, it is part of life and part of football – individuals have their own dreams and their own goals and objectives in life.

19 – Philippe Coutinho has scored 19 Premier League goals from outside the box – one more than Robbie Fowler and second only to Steven Gerrard (33) among Liverpool players. Gifted.
— OptaJoe (@OptaJoe) 26 December 2017

“Players will come and players will go, that is football, but as a club we are big enough and strong enough to continue with our aggressive progression on the pitch, even when we lose an important player.

“We have never been in a better position in recent times, as a club, to react in the right way. We will use our size and strength to absorb moments like this and still move forward.

“I have been here long enough now to know in the history of Liverpool, key players have left before – but the club always goes on. You cannot transfer the heart and soul of Liverpool football club, although I am sure there are many clubs who would like to buy it.

“I have so much belief in the talent we have here already and even more faith, together with our owners, that we will make continued investment into the playing squad, which will allow more growth and more improvement.

“So as we bid farewell to Philippe, we continue on our path of progress and development as we work towards our common goal of bringing trophies back to Anfield.”