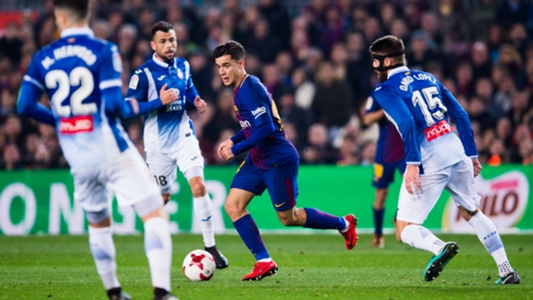 Ernesto Valverde insists Philippe Coutinho can excel in a number of different positions for Barcelona as he looked back on a busy transfer window at the club.

Coutinho has made a low-key start to his Barca career on the back of his blockbusting €160m move from Liverpool.

The Brazil international was initially laid low by a thigh injury before appearing as a substitute against Espanyol in the Copa del Rey and playing an hour as late goals from Luis Suarez and Lionel Messi sealed a dramatic 2-1 La Liga win over Alaves at the weekend.

Coutinho is in line to feature once more when Barca host Valencia in the first leg of their Copa semi-final on Thursday.

The 25-year-old’s appearances have come nominally on the right of midfield for Barca so far and Valverde feels his versatility will be a major asset.

“He works well in several positions,” the head coach told a news conference. “He can play at number 10 or on the left as he did at Liverpool or even the right, as in the Brazil national team.

“And in both Liverpool and in Brazil things have gone well for him. That’s why we signed him – his versatility will help us.”

Valverde: “It’s vital to put in a good performance in the first leg because they are very strong in Mestalla. It will be important not to concede” #CopaBarçapic.twitter.com/rR8bsbMv8Z
— FC Barcelona (@FCBarcelona) January 31, 2018

Coutinho’s arrival at Barca was a contributing factor to Gerard Deulofeu exiting on loan to Watford and Valverde confirmed Russia 2018 had been in the Spain winger’s thinking.

“I talked to him and we both thought that the best thing was a way out,” he said.

“We think the best thing is that he can have minutes because there is also a World Cup and there are options [for Deulofeu] to go.

“I am happy with him personally because of how he has been here.”

Arda Turan and Rafinha have also departed on initial loan moves but Aleix Vidal remains at Camp Nou despite speculation linking him with a switch to Roma.

“He’s not the undisputed starter but he’s been playing and helping regularly, entering some games in the second half and starting both against Espanyol,” Valverde added.

“In addition, three players who play in a similar position to that of Aleix have left. That’s why it’s good for him to stay.”