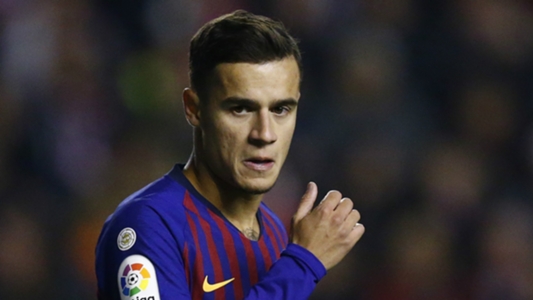 Philippe Coutinho has been assured that he has a long-term future at Barcelona despite finding himself stuck on the bench of late.

The Brazil international is just a year into his career at Camp Nou.

A €160 million (£144m/$183m) transfer during the 2018 January window took him to Catalunya from Liverpool amid much excitement.

The 26-year-old has struggled to justify that hefty price tag and started to slip down the pecking order under Ernesto Valverde as a result.

He has not started a game since December 2 and saw just seven minutes of action during a 2-1 victory over Getafe on Sunday .

Coutinho is, however, tied to a lengthy contract and is being backed to come good, with Barca director Guillermo Amor telling Movistar : “Coutinho’s a player with a lot of experience, one of the best players in Europe and he is ready to play [for] five minutes or 90 minutes.

“He’s a player that thinks more about the team than himself and there are no doubts about him being one of the best players in the world. He’s always played well for Barca, he could play [every game] from the off.

“Barca signed him because he’s one of the best in the world and he’s going to give us a lot. He’s got many years left on his contract and a lot to give to Barcelona.”

Of Coutinho’s 22 appearances this season, 15 have come from the start.

He has contributed five goals and four assists across La Liga and the Champions League, but more is expected of him.

Ousmane Dembele has filled a role on the left of Barca’s attacking unit as Valverde explores other options, while Arturo Vidal and Arthur are being preferred in more central midfield berths.

There is still time for Coutinho to make his mark this season, as the games come and thick and fast after the winter break.

Barca are seeking to successfully defend their Liga title this term, while they also have Copa del Rey and Champions League last 16 outings approaching in the coming weeks.