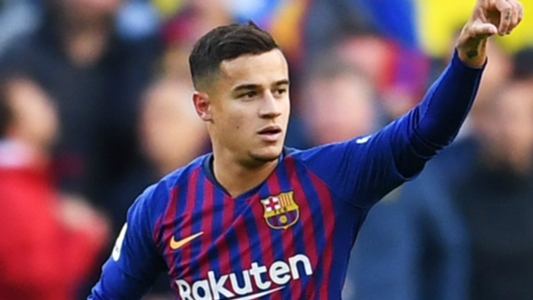 Philippe Coutinho has returned to training following the hamstring injury that has kept him out since the first week of November.

The Brazilian had been expected to miss three weeks for the champions after picking up a knock during the team’s 1-1 draw with Inter Milan at San Siro earlier this month, but trained on Tuesday alongside those of his teammates who are not away on international duty.

Coutinho could now be in contention to play some part during Barca’s game away at Atletico Madrid on Saturday having missed the side’s shock 4-3 home defeat to Betis plus Brazil’s game against Uruguay in London during the international break.

Training alongside Coutinho on Tuesday were Juan Miranda and Riqui Puig from Barca’s B team.

Neither player has yet made an appearance in Ernesto Valverde’s first team at Camp Nou but the manger took the opportunity to give both youngsters a run-out whilst the bulk of the squad remains away on international duty.

Barca sit top of a tightly packed La Liga table despite defeat to Betis last time out, their second defeat of the season in the league, but will relinquish top spot should they lose for a third time against Atletico at the Wanda Metropolitano on Saturday evening.

And the champions could fall as low as fourth by the end of the weekend if Sevilla and Alaves also pick up wins.

Barca’s internationals are due to report back for training on Wednesday morning before traveling on to Madrid.

Valverde will likely still be without Lionel Messi who is yet to recover from the fractured arm he sustained during the win against Sevilla last month.

Atletico could be without as many as four of their central defenders against Barca with Diego Godin, Lucas Hernandez, Stefan Savic and Jose Maria Gimenez all having spent time on the treatment table.

Diego Simeone is hoping that the international break will have given sufficient time for at least two of his first choice defenders to recover their fitness, in order to prevent him having to turn to emergency measures against the champions.