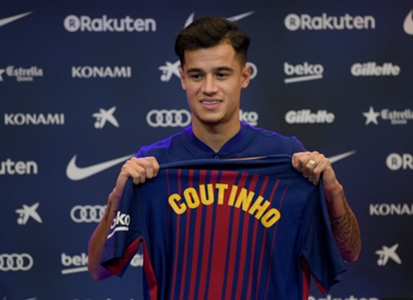 Barcelona have announced that Philippe Coutinho will wear the No.14 shirt with the club.

Coutinho arrived from Liverpool in a £145 million deal earlier this month, and has yet to make his debut with the club while recovering from a thigh injury.

The 25-year-old will take over the No.14 from Javier Mascherano, who wore the number for seven and a half seasons before his departure from the club was confirmed on Tuesday.

Mascherano will join Chinese side Hebei China Fortune on Friday, Barcelona have confirmed.

In addition to Mascherano, the No.14 at Barcelona has also been worn by Johan Cruyff, Emmanuel Amunike, Gerard Lopez, Santiago Ezquerro and Thierry Henry.

It will be the first time Coutinho has worn No.14 in his career.

The Brazil international has joined up with Barcelona for training, and could make his Blaugrana debut on Thursday in the Copa del Rey against local rivals Espanyol.