There was one certainty before Liverpool’s victory at the Etihad Stadium which remained afterwards: Philippe Coutinho’s genius is at its greatest against Manchester City, who struggle to contain his mastery.

The 23-year-old was irresistible in the first half of Liverpool’s 4-1 victory, where he was directly involved in the opening three goals. He displayed different qualities for each of them: intelligent pressing and supply for the first, a composed nutmegged finish for the second – his fourth goal against City in five Premier League appearances – and the awareness to read Emre Can’s backheel and pass it on for Roberto Firmino as the Reds strangled the hosts in 32 minutes.

The pre-match narrative centred around Raheem Sterling facing Liverpool for the first time since his controversial summer switch, but it was the young talent who stayed on L4 and signed a new five-year deal that attracted the spotlight on the pitch. Coutinho again cemented his status as his club’s standout player; decisive in all three of their away league wins this season. 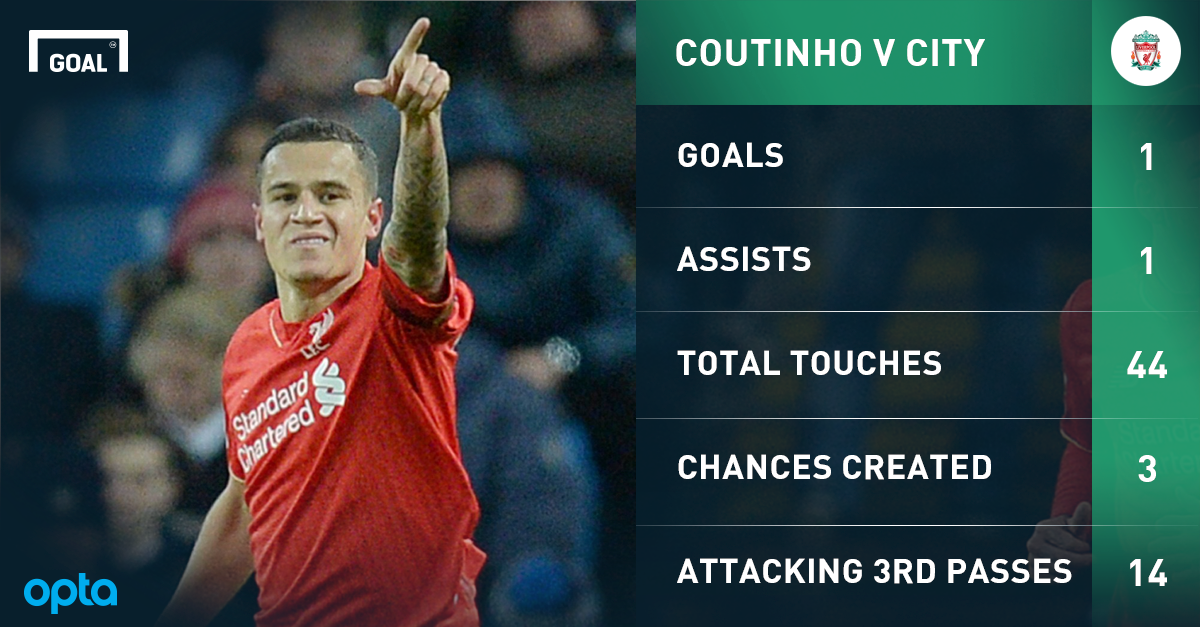 A big-money, off-season signing did make a gigantic impact – but it wasn’t the one who swapped Merseyside for Manchester. Firmino, recruited from Hoffenheim, had his best game for the club as he expertly linked up with Coutinho. The Brazilian duo prompted a series of powerful fist pumps from Jurgen Klopp while they perfectly illustrated his ‘fighting football’ philosophy.

The pair combined industry and artistry to surgically dismantle City, who could not cope with the counter-press. Liverpool were collectively brilliant, but this combination in particular floored Manuel Pellegrini’s men. Klopp’s thinking would have been to give the hosts hell early on, and his side did exactly that on Saturday evening. 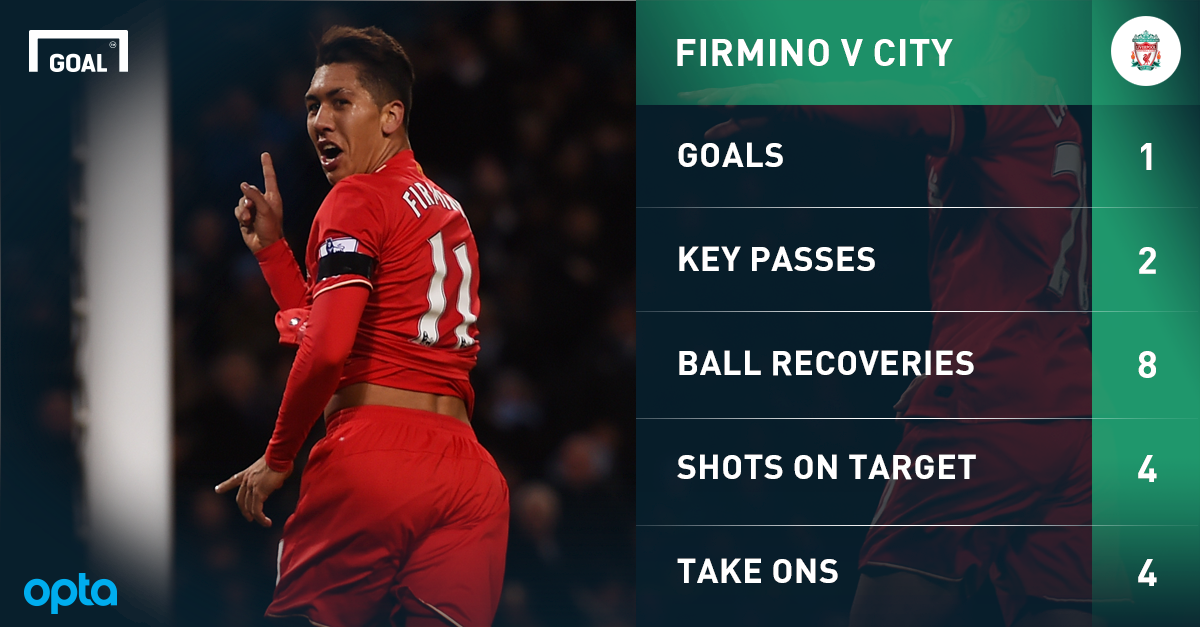 He picked the same starting line-up that was triumphant away to Chelsea – with the only change being Dejan Lovren replacing the injured Mamadou Sakho. The idea was the same as it was at Stamford Bridge; to stifle the opponents by hounding the man with the ball then hurting them after winning it back.

At Chelsea the gameplan was not executed as clinically as it was at the Etihad. It was easier to talk up the shortcomings of Jose Mourinho’s side than to salute Liverpool’s effort. But City weren’t able to demonstrate their usual swagger primarily because the visitors didn’t allow them to.

When Klopp was unveiled at the start of October, he guaranteed his charges would work harder than the best teams in the league. He explained: “If opponents are better, you have to bring them to your level, and then you can kill every team.”

Saturday evening was a masterclass in that as Liverpool disrupted the hosts, forcing them to surrender possession before then pressuring them in attack. Even when Sergio Aguero’s stunning strike roused the home crowd and galvanised City, Liverpool did not crumble and continued to threaten on the counter.

Klopp wildly swirled his arms in a circular motion, encouraging them to pour forward at pace with every break and the players responded. They pushed to destroy City further, with Martin Skrtel’s half-volley to make it 4-1 to Liverpool summing up just what an unusual night it was at the Etihad. 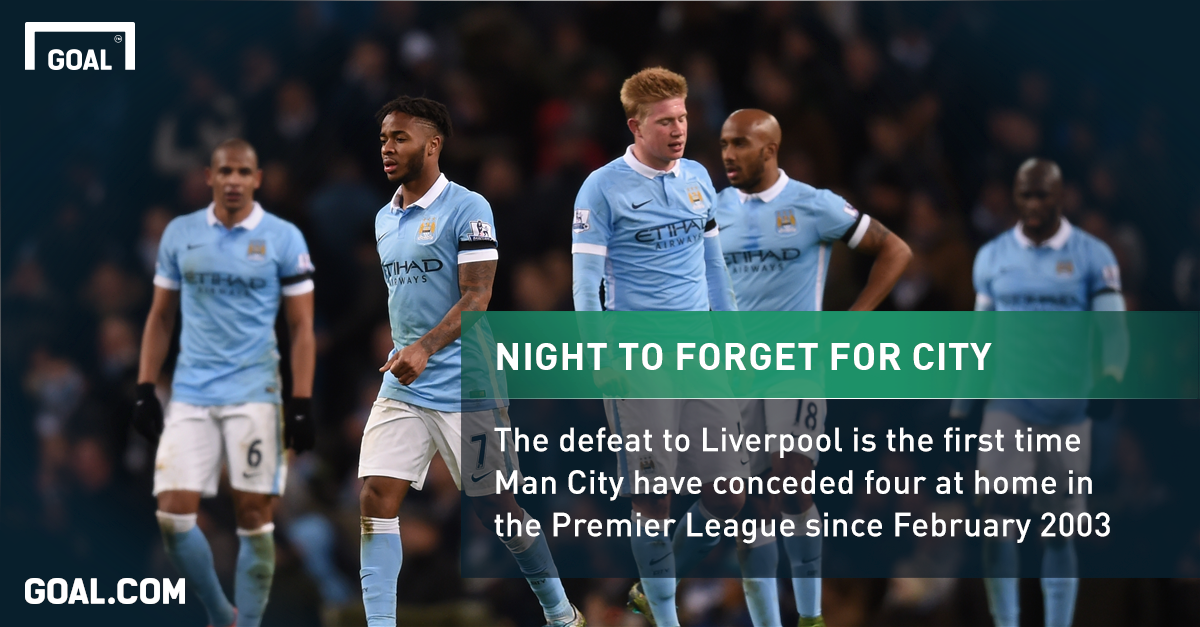 The Reds have now scored seven goals in their last two away Premier League games – the same as they managed in their 11 before that. What does that mean for the side? “The good news is that we can do better,” Klopp said post-match.

“At half-time I told the boys they were surprised to be winning 3-0, and we must do better in that situation. We have quality, we could have more goals but 4-1 is perfect. The boys can believe now that they are stronger than many people think.”

The away support taunted Sterling with chants of ‘What’s the score?’ It was a result the winger – nor anyone else at the Etihad – will easily forget.