A night of celebration for Barcelona at Camp Nou. The Blaugrana went behind somewhat carelessly in the first few minutes, but proceeded to lay on an exhibition in attacking football after that. And it was not only Lionel Messi this time, either.

The Argentine was at the forefront of all of Barca’s best play, threading inconceivable passes through to his team-mates from seemingly impossible angles, one after the other.

Thanks to the five-time Ballon d’Or winner and his partner in crime Luis Suarez, Ernesto Valverde’s side were back in it almost as soon as they had gone behind, the Argentine setting up the Uruguayan for a well-worked leveller.

Messi then added two incredible goals of his own, dancing around the area until he found an opportunity to shoot for the first and slotting a low free-kick under the wall for his second of the evening to make it 3-1.

This was mesmeric Messi at his brilliant best and the Camp Nou crowd roared in appreciation. However, things were proving a little more difficult for the club’s two expensive new forwards – Ousmane Dembele and Philippe Coutinho.

That would soon change, however, as the former Liverpool connection of Coutinho and Suarez combined to make it 4-1 before the interval, the Brazilian claiming his very first assist for the Catalan club since moving from Anfield last month.

Dembele was there amid the celebrations, yet there was a look on his face that seemed to say, “We’ve scored four and I haven’t done much…” In truth, he had not, but he did improve in the second half and ended up bagging an assist himself with a fine run and cross as Suarez completed his hat-trick.

Before that, Coutinho had gone one better by blasting home a long-range effort to claim Barcelona’s fifth of an extraordinary evening.

By the end, it was three for Suarez, two for Messi, one for Coutinho – and six of the best for Barca. 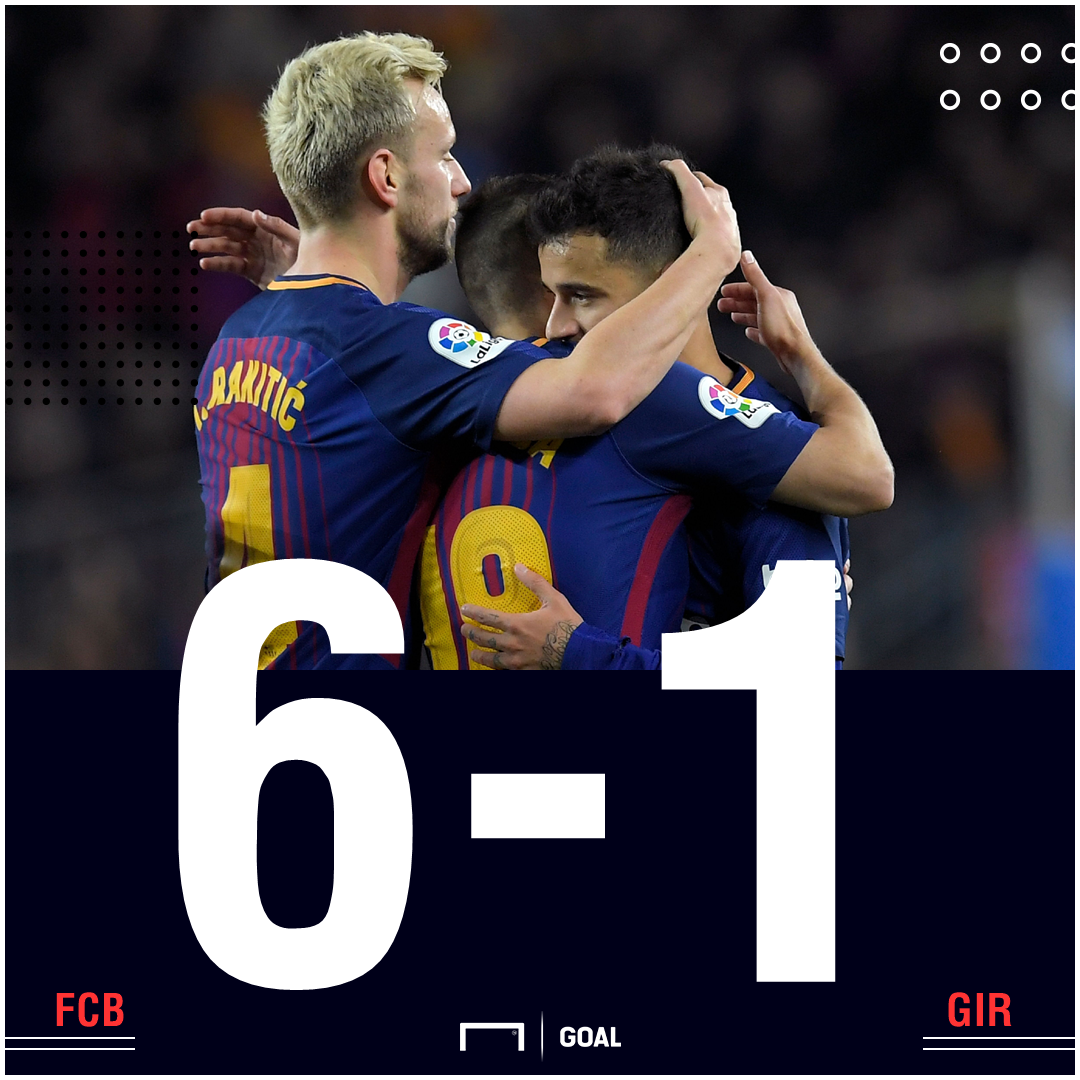 The football, at times, was extraordinary and Dembele grew into the game as well. Having been left on the bench for the full 90 minutes in the Champions League against Chelsea on Tuesday, he had a point to prove and showed signs here that he can become the great player that Barcelona believe they bought.

The France forward is still only 20 and has time on his side, although with Coutinho cup-tied in the Champions League, his adaptation this season after two injuries and a tough time so far could be the key to Barca’s hopes in the continental competition.

On this evidence, that process has started already and, with Messi and Suarez in this mood, Barca’s breathtaking football made a mockery of suggestions after the game at Stamford Bridge that this team is tired and predictable.

Valverde’s side are surely anything but that, and with Coutinho and Dembele starting to show that they belong alongside Messi and Suarez, these are exciting times again at Camp Nou.