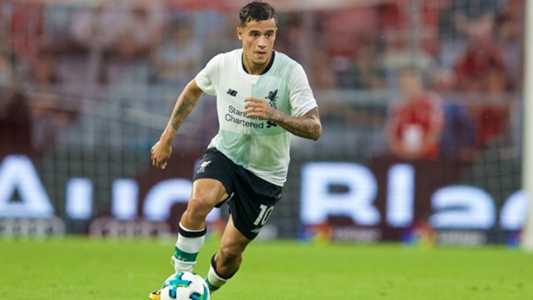 In the aftermath of Neymar’s record move to Paris Saint-Germain, Brendan Rodgers has joked that his Celtic outfit will move for Philippe Coutinho before the end of the transfer window.

The Scottish champions have until Monday at 23:00 to register new players before their Champions League playoff against Astana, and following the €222m deal to take the Brazil international from Barcelona to the French capital, Rodgers suggested an equally improbable transfer.

“Am I looking to bring someone in ahead of Astana? Yes, Coutinho,” he jested. “We’ll see, we’re looking but I will always wait for the right quality.”

“It’s an astronomical amount of money to pay for a wonder player, frightening really,” he added. “Everyone tells you there is not a player worth anywhere near the value given to Neymar but my experience of the big clubs, big fees and big salaries is that, if they are paying that, they think they can get it back.

“If they are paying £198 million in a transfer feee, they obviously think they can get it back through shirts or TV. If they buy a £100m player they think, as a business, they will get at least £101m back. That’s how they work.

“The market is there. I’ve been on a couple of tours with Liverpool to places such to Jakarta, where there were 88,000 screaming-mad Liverpool supporters at a game. In Melbourne, at the MCG, you had 96,000 Liverpool fans.

“Actually, in Britain we’re that (pinches finger and thumbs an inch apart). The game worldwide is massive and the TV rights are absolutely astronomical. Is it sustainable? Time will tell, but it’s only gaining in popularity. With social media and everything else, the accessibility now is even greater.”

Celtic, who suffered at the hands of Neymar and Barca in the Champions League last season, won their opening Scottish Premiership game 4-1 against Hearts on Saturday.