?After smashing in two very well-taken goals against Barcelona’s new Japanese mates Vissel Kobe on Saturday, Carles Perez has thrust himself into the limelight after outperforming Barcelona’s usual stars and new signings.

Given the Catalan club’s constant supply of talent, and their revolutionary La Masia academy producing some of the worlds finest technical players over the years, could the young winger be the next on that list?

Only time will tell if Perez will be competing with Messi and co at the top of the Barca attack next season, but here we take a look at the player to see what else there is to know about the 21-year-old.

He Is Often Compared to Arjen Robben Well there you go. There probably isn’t a comparison in football that can tell you as much about a player as a comparison with Robben does. Fast, direct, left-footed, plays on the right, likes to shoot.

Perez often does play on the right and is certainly direct. A within-Barcelona comparison has been with ex-player Pedro, which certainly makes sense too. Perez is a direct runner who looks at hitting the goal at the soonest opportunity. He wastes no time in driving towards it by any route, as was so evident against Kobe, while the rest of the team played at a much slower pace.

Despite being predominantly right-sided, Perez played on the left against Kobe with both goals coming from the left side of the box.

He Won’t Be Leaving Barcelona Any Time Soon Given the way that Perez celebrated the two goals he scored on Saturday, you could see how much it all meant to him.

Speaking after the match (via ?Sport) he said: “It’s clear in my mind that I want to stay here. It’s about being patient, not changing everything and leaving at the first chance.

“Since I was a child I’ve been a Barca fan and I want to be part of the first team here.”

He has also spoke publicly about how proud he was after his first-team debut in May, and reiterated that his hard work is for to play for Barcelona, not another club.

He Is Not One of Ernesto Valverde’s ‘Chosen’ Five 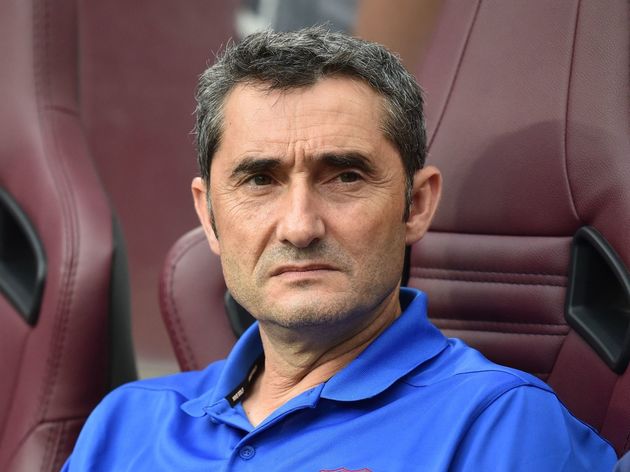 Following Valverde’s contract extension with Barca in February, the club were reportedly concerned with the lack of promotion of La Masia players. Following these discussions Valverde is said to have ‘listed’ five players who he would aim to give more playtime with the first team in future.

Among the list were Riqui Puig, Moussa Wague, Oriol Busquets, Miranda and Abel Ruiz, as per ?Sport.

After appearing twice in preseason it is possible Valverde has changed his opinion regarding Perez. Two impressive goals will certainly help his case. And at 21 years old, it is certainly this time in his career where the first team will be most in reach.

He Has Currently Taken No. 7 at the Club There may be little to read into this, but as the quick thinkers of you will have noticed, the number seven is normally worn by Philippe Coutinho.

In the loss to Chelsea last Tuesday and the match on Saturday, Perez was seen wearing the number seven in Coutinho’s absence. Papers, websites and every man and his dog have been focusing on the Coutinho side of this, suggesting the Brazilian could be out the exit door, yet for Perez this would be a good indicator for him as the one to 11 numbers are normally reserved for the club’s biggest players.

Perez is obviously a fan of the number, featuring in his Instagram name and with many of the player’s photos featuring it too. Last season Perez finished as the club’s B team’s top scorer, despite most often playing out wide.

Netting nine goals in 26 appearances, this was two more than any other payer in the team.

After winning the UEFA Youth League (the Youth Teams’ Champions League) in 2018, he finished that competition with a particularly impressive seven goals in nine appearances too. As the teams that feature are under-19 teams, Perez did not appear in this years edition. Yet he is one of the top appearance makers and goal scorers over his time in the tournament.

Finishing as Barcelona B’s top scorer is not a bad string to add to your bow, and certainly shows promise.

After signing a contract extension in June 2018 for a further two years, Barcelona opted to add a €100m release clause to his contract. We have seen the club do this with other current academy players so it is not completely new, however with a value set at €100m at such a young age, it does show a great deal of confidence in the player.

Here’s seeing that at 21 years old whether he can make his mark in the first team in the coming months.