Barcelona president Joan Laporta admits he has been in contact with Xavi over the last few weeks but refused to confirm whether he will take over from Ronald Koeman at the Nou Camp.

Koeman was sacked as manager after Wednesday’s defeat at Rayo Vallecano left Barca well off the pace in La Liga, with Laporta conceding he should have made the decision sooner.

Former midfielder Xavi, currently in charge of Qatari club Al Sadd, is the heavy favourite to be Koeman’s replacement and the pair have been talking.

Barcelona B boss Sergi Barjuan will take the team on an interim basis, starting against Alaves at the weekend.

“My opinion about Xavi as a manager is he is in a process learning, evolving, I have really good references from close people who know him better than me in that way,” Laporta said at a press conference on Friday.

“I talked with him two months ago when we gave Ronald Koeman this confidence because I understand that we had to give him those months, the team needed some time to recover.

“I have a great relationship with Xavi, I have been speaking with him in the last month, I know his opinion about this squad, what he thinks has to happen. We talk as two friends and in this case, my opinion is a really good one.

“I am talking to him because he loves football, he is a huge Barca fan, it is one of his goals in his life.

“If he is the one able to manage this squad, I have a great relationship with him and he is a possibility because we will see how everything will continue evolving.

“These are private conversations between friends and I cannot explain what we talked about.

“I already told you and I cannot explain anything about our options because it will not be professional and it will affect our plans. I am sorry, but I cannot tell you anything.

“I have always said one day he will be Barca’s head coach but I don’t know when. We have great references about Xavi at Al Sadd.

“All our reports about Xavi are positive. We can talk a lot about Xavi but I cannot give you more details. He is in all the papers, but we also have other options.”

Koeman got a vote of confidence several months ago, but Laporta accepts he should have been fired sooner in the season.

Koeman knew his time was up as Barcelona head coach but some supporters think he was in an impossible position, says La Liga TV presenter Semra Hunter

“Probably, yes,” he said. “Looking back it is easy to analyse, we felt Koeman deserved confidence to recover some injured players and it was a way to motivate the manager.

“I looked for some positives. Probably we had to make an earlier decision, I assume the responsibilities of this decision.

“The situation was not sustainable. We needed to act. We were not on course to achieve the objectives of the season, which is to win titles.”

“My objective is to win and have this team winning their games,” he said.

“If we see that things are going well then good, but if we need to take different decisions then we will do that.” 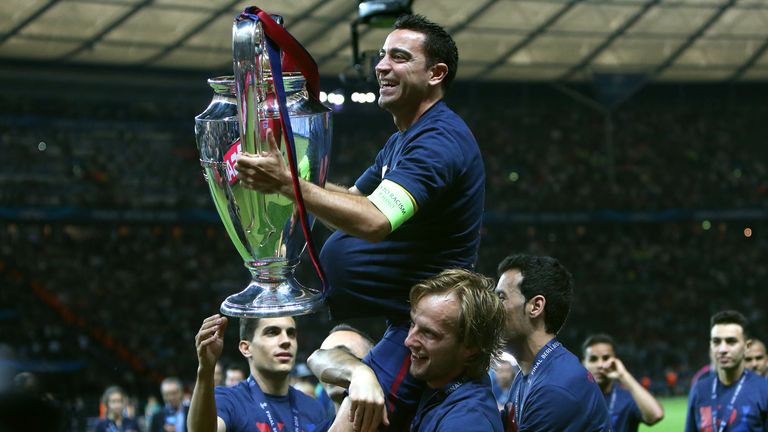 Guardiola expressed his sympathy for Koeman following his sacking but says he has no doubts about Xavi’s ability to manage the Catalan club.

“Ronald and myself know exactly that we depend and live and we are there for the results,” said former Barcelona boss Guardiola.

“Nobody can survive without good results, not Koeman or Pep. All I can say is he’s a friend of mine, I wish him all the best, we can chat soon…

“Xavi – I don’t know what’s going to happen. In case it happens I don’t have any doubts he’s ready to do the job.

“He knows the game, he has passion and I’m pretty sure he has more experience now than I had when I took over.”

In response to what’s circulating recently, the #AlSadd management reaffirms that Xavi has a two-year contract with the club and is fully focused on the team’s upcoming matches, to maintain our lead at the top of the league and to defend the title.#AlwaysAlSadd pic.twitter.com/dJP4g0xZBx

Xavi has no plans to take over as Barcelona coach, his club Al Sadd have said, insisting the former midfielder still has a two-year deal to see through.

The Qatari side are desperate to keep hold of their coach and shared stories on Thursday of fans begging him to stay.

Xavi has managed Al Sadd for two years and joined as a player in 2015 after leaving Barca. The 41-year-old has enjoyed great success since moving to Doha in 2019, winning seven major trophies for the reigning Qatar Stars League champions, who took to Twitter to insist their coach is not eyeing a move away.

“In response to what’s circulating recently, the #AlSadd management reaffirms that Xavi has a two-year contract with the club and is fully focused on the team’s upcoming matches, to maintain our lead at the top of the league and to defend the title,” they said in a statement on Twitter.