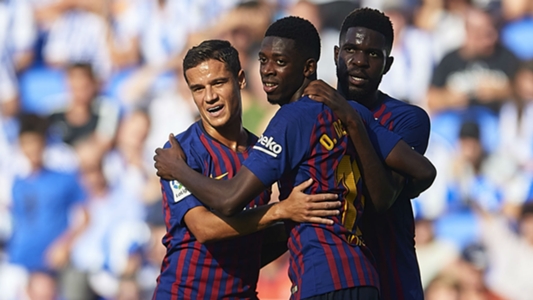 Barcelona do not have to choose between Philippe Coutinho and Ousmane Dembele, according to Ernesto Valverde.

With Brazil youngster Arthur having established himself in midfield, Coutinho and Dembele have been left vying for a place in the XI in recent weeks.

The 21-year-old France international Dembele started the campaign with some difficulty, and has found himself under criticism for showing up late for training.

But there can be no questioning his on the field performance as of late, as Dembele has either scored a goal or delivered an assist in each of his last five appearances for the club.

Dembele has been rewarded with starts in Barcelona’s last two La Liga fixtures and scored Barcelona’s 4-0 win over Espanyol, then added the side’s lone goal in a Champions League draw with Tottenham midweek.

Meanwhile Coutinho was relegated to the bench in the derby win, but did start alongside Dembele in both the victory over Villarreal and the draw against Tottenham.

But Valverde has insisted that both players – who he believes are among the most dangerous in world football – fit into his plans, and can be played together more often if needed.

9 – Ousmane @Dembouz has been involved in nine goals in his last nine appearances for @FCBarcelona in all competitions (four goals and five assists). Productive. pic.twitter.com/wdvjSJ7UF9
— OptaJose (@OptaJose) December 11, 2018

“They can play together as they have already done this season,” Valverde told a news conference ahead of Barca’s meeting with Levante on Sunday.

“I know these are inevitable questions but we know that we have the chance to use both.

“I’ve always considered [Dembele as one of the most dangerous], but we also have Coutinho and a few more.

“We want the best from them.”

Atletico Madrid’s 3-2 victory over Rayo Valladolid brings their capital club level on points with Barcelona at the top of the table, but the reigning champions can go back clear in La Liga with a result against Levante.