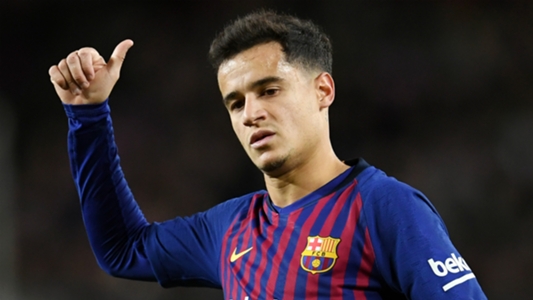 Barcelona continue to back Philippe Coutinho amid ongoing talk of a possible summer switch to Manchester United or Chelsea.

The Catalan giants invested heavily to sign the Brazil international from Liverpool during the winter transfer window of 2018.

He had been a top target for some time and was considered to be quite a coup when lured from Anfield to Camp Nou.

Coutinho has, however, struggled to replicate his Premier League form in La Liga and has seen questions asked of his value as a result.

It has been suggested that an imminent return to England could be on the cards, with Old Trafford and Stamford Bridge mooted as possible destinations.

Barca, though, have the 26-year-old tied to a contract through to 2023 and will give him time in which to prove his worth.

Guillermo Amor, the club’s director of institutional and sporting relations, told Sport when quizzed on the speculation surrounding a talented playmaker: “At the beginning with Coutinho we were happy and have always been happy.

“We have to give him chances and he’ll take them. He’s always shown his quality. He takes risks, he tries.

“It feels as if everyone is watching what he does, the poor guy. But we believe he’ll carry on going forward.”

Coutinho enjoyed a promising end to the 2017-18 campaign, netting seven times in his last six appearances.

He then went on to find the target on two occasions for Brazil at the World Cup finals in Russia.

Much was expected of him in his first full campaign at Camp Nou, but he has mustered just five goals and as many assists across 27 appearances in La Liga and the Champions League.

A further three efforts have been registered in the Copa del Rey, with Barca still competing on multiple fronts and giving Coutinho as many chances as possible to play his way back into peak form.