?Liverpool’s Champions League hopes look all but over after a Lionel Messi double saw Barcelona claim a convincing first leg semi-final win in the Camp Nou, with the Reds missing plenty of chances in the process.

Despite a bright start from Jurgen Klopp’s side, the hosts took the lead in the 25th minute when Jordi Alba’s pinpoint low cross was expertly converted by Luis Suarez at the near post to claim his first Champions League goal of the season.

Liverpool came out of the traps well in the second half, with James Milner and Mohamed Salah forcing Marc-Andre ter Stegen into excellent saves.

But it was the Spanish champions who grabbed the crucial second goal against the run of play, as Suarez’s shot cannoned off the crossbar, before Lionel Messi followed up with a tap-in.

Messi completed the scoring with a stunning 30-yard free kick ten minutes before full time, but only before Salah missed a huge opportunity to bag the Reds an away goal, but he could only hit the post from close range.

WOW! Just Wow. Messi scores his 600th goal for @FCBarcelona with as good a freekick as you’ll ever see. The little genius defies logic.??

After claiming their eighth La Liga title in ten years over the weekend, Barcelona could now completely focus on claiming their first Champions League crown since 2015.

An ocean of red, blue and gold greeted the players as they graced the Camp Nou pitch, with the 98,000 capacity desperate for their side break Real Madrid’s strangle hold on Europe’s top prize.

STAR MAN – Who else?

Lionel Messi’s new tactical role in games is fascinating. He is like a predator who stalks his prey, almost taunting his opponents and luring them into a false sense of security.

Then, out of nowhere, he will strike.

He was in the right place in the right time following Suarez’s crossbar hitting shot, before a world-class free kick potentially put the Catalonians out of sight in the tie.

Suarez deserves immense credit for his performance ans work rate, but this, once again, was the Lionel Messi.

The big question leading into this game for Liverpool was a simple one, how do you stop Messi?

Their answer? Kick him. A lot.

That feels harsh on Liverpool, particularly given the balance of the second half, but ultimately that’s Barcelona: one wrong touch, one bad bounce, and they hurt you. 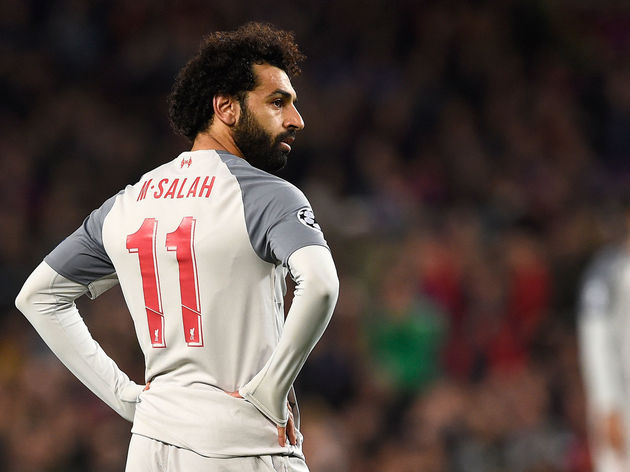 Opportunities kept coming, but they kept slipping away, and once that extraordinary Messi free kick went, the deflation was clear to see on the faces of Klopp’s men.

Their performance merited more, but the Reds have a mountain to climb in the return leg, but they absolutely have to be more clinical at Anfield next week if they stand any chance of reaching their second consecutive final.

Ultimately, it just wasn’t their night.

STAR MAN – His side may have conceded three, but Andy Robertson’s workrate and defensive class was clear for all to see this evening. 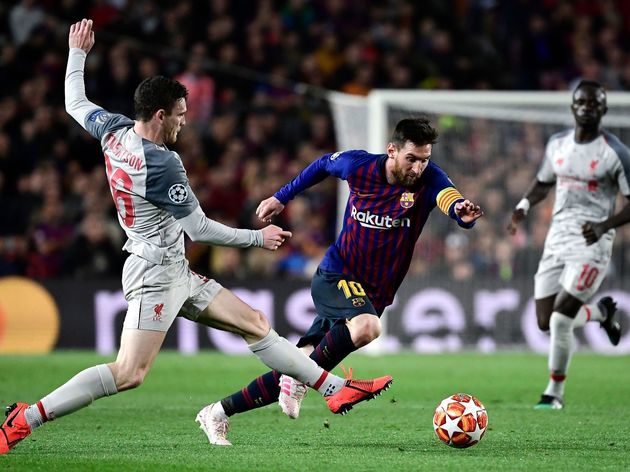 His relentless commitment to help his side at both ends of the pitch is to be admired, particularly  when tracking back to make dramatic last ditch challenges to stop Barca in their tracks.

His crossing was a constant problem for the centre-halves to deal with, and he was always an incredibly useful outlet on the visitor’s left hand side.

Nothing summed his performance up more than when Barca had a three-on-one counter attack to score a fourth at the end of the game, only for the Scotland captain to track back out of nowhere to keep the tie alive.

They then finish their triumphant league season against Getafe and Eibar, before their Copa del Rey final against Valencia on 25 May.

Liverpool continue their quest for a first Premier League title in 29 years when they travel to Rafa Benitez’s ?Newcastle, before finishing their domestic campaign against Wolves on Sunday following the Barca game on Tuesday evening.