Barcelona struggled to a 1-0 victory over a stubborn Real Sociedad side on Saturday evening, as a controversial Lionel Messi penalty helped la Blaugrana leapfrog Real Madrid at the top of the table.

Martin Braithwaite thought he had given the hosts the lead early in the first half, but he was adjudged to have slightly mistimed his run before cooly slotting home, and the effort was pulled back for an offside infringement.

Lionel Messi had the best chance of the first half, but he fired narrowly wide from the edge of the penalty area, and the two sides entered the dressing rooms all square at the break. The second half saw Sociedad threaten the Spanish champions time and time again on the counter attack, as Martin Odegaard and Aleksander Isak combined dangerously, but the Swedish forward fired wildly wide of goal. Nacho Monreal also flashed a shot wide of the far post as the hosts began to creak at the back.

But Barça were handed the chance to take the lead with ten minutes to go, when VAR penalised Sociedad defender Mikel Oyarzabal for a harsh handball offence, and Messi tucked away the spot-kick expertly.

The visitors pushed to grab an equaliser, but Barça secured all three points, despite having a late Jordi Alba strike ruled out for offside, and Setién’s men went two points clear of rivals Madrid at La Liga’s summit.

Is ?Lionel Messi really enjoying his football? ?Barcelona are much closer to a trough than a peak under Quique Setién, and it appears to be an enigma so complex that even their diminutive magician is struggling to solve it. 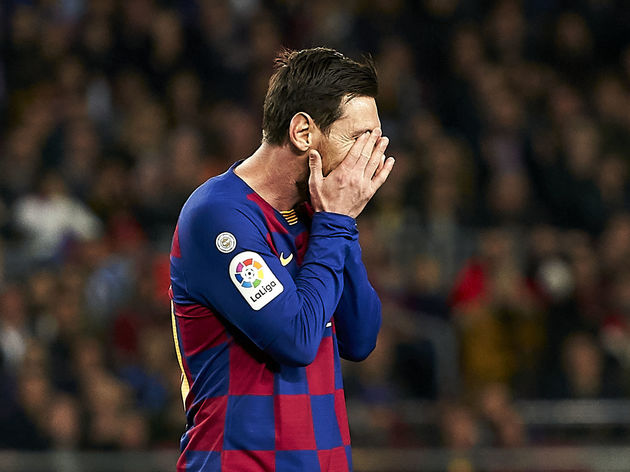 The Argentinian star missed two gilt-edged opportunities in the first half, showing a lack of killer instinct that we have seldom seen from the prolific forward. His desire to leave his mark on the game was evident, but he continued to squander chances, blazing over in the six-yard-box midway through the second half. He did secure the winning goal through a penalty, but overall, it was another hit-and-miss performance from the superstar.

?Messi picked up his third booking in successive matches on Saturday – the first time that he has achieved this feat in his entire career. Something tells me Barça’s talisman is feeling a tad frustrated at the moment.

Well, who would have honestly believed it? Martin Braithwaite, the panic buy of the 21st century, is actually proving his worth to this Barça side. The Danish forward has been deployed as a left-winger by Setién in recent games, and he injects a burst of pace that has been sorely lacking from this Blaugrana side. Braithwaite was unfortunate not to open the scoring in the first half, as his confident strike was ruled out for the most marginal of offside calls. The 28-year-old continued to terrorise the Real Sociedad defence with his lightning speed, and unlike many other players in the Barça side, he was able to take on – and successfully beat – his marker. While his teammates looked lethargic and disjointed, the winger was absolutely electric.

Braithwaite may have been a bit of a laughing stock when he arrived at Camp Nou in February, but no one is laughing now.

Barça follow up their tight win over Real Sociedad with a trip to struggling Mallorca next Saturday. Sociedad face Eibar in a midweek La Liga clash, as Saturday’s visitors aim to continue their push for European football.