Chelsea have signed former Arsenal striker Pierre-Emerick Aubameyang from Barcelona, with Marcos Alonso set to go the other way after his Blues contract was terminated.

Chelsea are understood to be paying in the region of £10m plus Alonso for the former Arsenal striker.

Aubameyang flew to the UK on Thursday afternoon for his medical and to finalise the deal, which was completed after the 11pm deadline after Chelsea filed the deal sheet to allow more time.

Aubameyang suffered a minor fracture of his jaw in an attack on his home over the weekend. The Gabon forward, who is expected to be out of action for three weeks, can resume non-contact training next week. 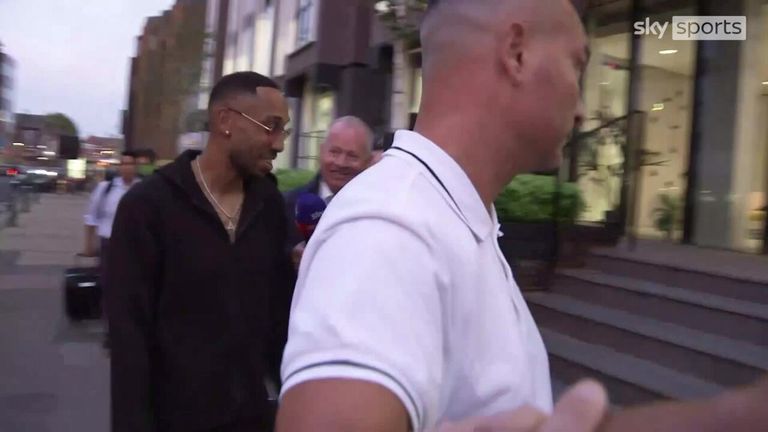 Pierre-Emerick Aubameyang has been spotted in London ahead of a deadline day move from Barcelona to Chelsea.

Aubameyang moved to Barcelona on a free transfer from Arsenal in January. Although Thomas Tuchel had been reluctant to talk about Aubameyang in public he was keen to work again with a player who scored 79 goals for him in two seasons at Borussia Dortmund.

While Barcelona are yet to formally announce Alonso’s arrival, he has left Chelsea by mutual consent, allowing more time for a deal to be completed. He won six trophies in his six years with the club, including the Premier League and Champions League.

Aubameyang’s signing means Chelsea have spent a huge £278.4m in the summer transfer window, including the arrivals of Wesley Fofana, Marc Cucurella, Raheem Sterling and Kalidou Koulibaly. It is the most any club has spent in a single transfer window.

Chelsea also finalised a loan deal for Juventus midfielder Denis Zakaria on Deadline Day, but a £43m offer for Ajax midfielder Edson Alvarez failed to materialise into a completed deal.

Carra: I’m delighted Auba is back

“He’s a quality player, there is no doubt about that. I think it’s a good signing. People may question Arsenal’s role in this and the fact they let him go for free, and now Chelsea are paying money for him eight months later.

“I think it’s a good signing for Thomas Tuchel and Chelsea, and also the right decision from Mikel Arteta – look at where Arsenal are right now.

“We know Aubameyang brings goals and quality but, at times, there are maybe situations and misdemeanours off the pitch or within the dressing room and Arteta couldn’t stand for that.

“But Tuchel knows him well from their time at Borussia Dortmund and, as a neutral, I’m delighted he’s back in the Premier League because he’s a brilliant player.”

“Some players stay your players because you were very, very close – and Auba is one of those players,” Tuchel told journalists last month, effectively validating reports Chelsea were eying a move for his former striker.

While the Gabon international created headlines for the right and wrong reasons during his time at Arsenal, Aubameyang simply produced goals at Borussia Dortmund under Tuchel – with 56 Bundesliga goals in 63 appearances across two campaigns.

That partnership ended when Dortmund sacked Tuchel at the end of the 2016/17 season and Aubameyang joined Arsenal in the winter window of 2018 for a then-club-record £60m – hitting the ground running with 10 league goals in just 12 starts.

However, his goal ratio dipped incrementally over four campaigns and culminated with him being stripped as club captain for disciplinary reasons before leaving the club by mutual consent six weeks later and joining Barcelona on a free transfer.

In true Jekyll and Hyde form, the flamboyant striker once again burst from the blocks in La Liga, averaging nearly one goal per game last term – helping the club climb from fifth in the league to finish runners-up behind rivals Real Madrid.

However, Barca have been busy in the transfer market this summer amid an ongoing controversy surrounding their rush to raise capital and register incomings, which include former Bayern Munich striker Robert Lewandowski.

Barcelona opened the door for Aubameynang to leave the club after only seven months at the Nou Camp – making around £10.3m and acquiring Alonso in the process – and Aubameyang’s old mentor has come calling. But why?

Some players stay your players because you were very, very close – and Auba is one of those players

The 33-year-old would slot seamlessly into Tuchel’s plans, having worked together so fruitfully during the two-year period which ended five years ago.

Additionally, Aubameyang has a track record of making instant impacts and would fill the No 9 void left by Romelu Lukaku, who failed to ignite upon his £97.5m return to the club last season and was loaned back to former club Inter Milan this term.

Chelsea have been struggling with an age-old issue during the German’s tenure – converting chances. Albeit only five games in, the Blues have the seventh-worst expected-goal differential in the division.

As the graphics below reveal, Aubameyang also offers versatility and positional fluidity – having worked the left flank and central positions in equal measure during his time at the Emirates.

On song, the striker is clinical and the goal map below highlights what he could offer Chelsea: goals, in and around central areas inside the box, and is likely to primarily take up a central position – allowing summer-signing Raheem Sterling to be deployed down his favoured wide channel.

With the Blues sat 10th in the Premier League table after five games and only two wins under their belt, Tuchel will be hoping his former favourite can make another explosive impact.

How much did clubs spend?

Chelsea led the way for total spent this summer on new signings with £278.4m – which surpassed the all-time record outlay in a summer window set by the Blues two years ago.