?Barcelona stuttered to a shock defeat in their opening La Liga clash of the season, going down 1-0 to Athletic Club after a fabulous late overhead kick from veteran striker Aritz Aduriz.

which Barcelona have now confirmed on their official website to be a calf problem. 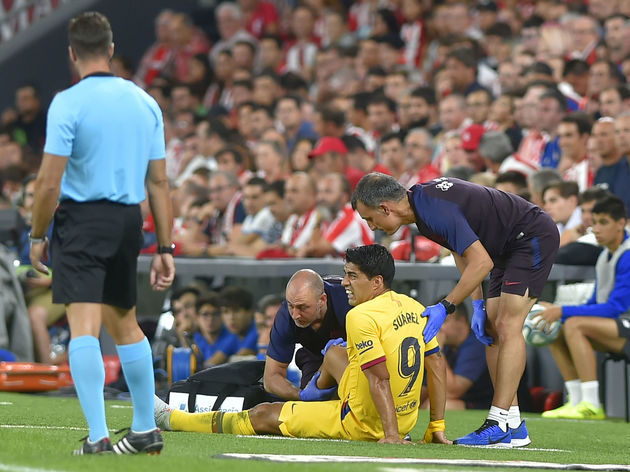 Griezmann’s long awaited debut was disappointing to say the least, with the Frenchman unable to stamp his authority on proceedings.

Perhaps feeling the weight of expectation, Griezmann was a peripheral figure for much of the game against Athletic. You may think that Valverde would leap to the defence of his new signing, but Barça’s boss instead claimed that the £108m man must do more to get involved. “Of course, he is aware that we all expect a lot from many players and he has to look to get more into the game.”

Valverde’s management will be under intense scrutiny after last season’s Champions League failings, in which Barça surrendered a three goal lead to Liverpool at the semi-final stage. So defeat in the first game is not what he would have needed – and Valverde was acutely aware that things were not good enough, admitting that Lionel Messi’s absence through injury was felt.

“It was not good, but the best chances were ours although we didn’t do well, we were too far back. In the second the game was ours and we corrected the situation,” Valverde admitted, via Sport.? “It’s true we’re used to playing in a way and Leo shines in a lot of situations because he beats a man or filters a pass through. We’re not all like him and we have to learn to cope when he’s not there. It’s inevitable to miss him, but we need to do other things too. We have to transform possession into goal chances, that’s what counts.”

Joining Griezmann and Suárez in Barça’s front three on Friday was their second most expensive signing of all time, Ousmane Dembélé. But collectively, Valverde’s side managed just two shots on target at the San Mamés Stadium – which must be addressed going forward.

If there’s any Spanish club that’s worthy of the “Més que un club” moniker, it’s Athletic Club and not Barça, who replaced their injured €82m Suárez and moved their €125m Dembélé to join €120m Griezmann as €142m Coutinho is likely to leave with €200m Neymar likely returning.

Barcelona’s 1-0 loss was the first time that they’d walked away from the opening weekend of a La Liga season without a point or even a goal since 2008, where then-manager Pep Guardiola saw his side lose on the road to