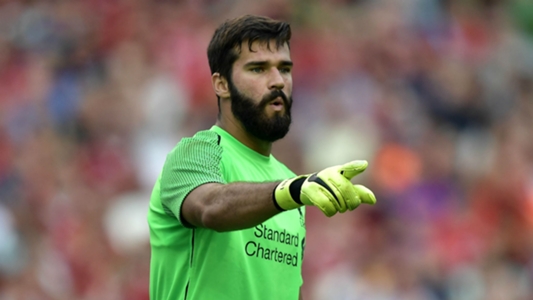 Alisson, 25, joined Liverpool from Roma in July, and has made a fine start in England.

The shot-stopper was linked to the likes of Real Madrid before his move to Anfield, and the goalkeeper now says Coutinho – who left Liverpool for Barcelona in January after five years at the club – played a part in his decision.

“He spoke highly of Jurgen [Klopp, Liverpool manager] and about the players,” he told reporters.

“He said there is no vanity in the squad but it’s a very ambitious squad with a strong desire to win.

“Coutinho also said he was very happy here with his family, which is really important. Our wives spoke to each other too and they said they had a great time living here, and we are very happy.”

Alisson has helped Liverpool win all six of their Premier League games to start the season, despite a howler against Leicester City earlier this month.

The Brazilian was dispossessed by Kelechi Iheanacho, leading to Leicester’s goal and plenty of criticism.

Despite that mistake, Alisson, whose team visit Chelsea on Saturday, said consistency was his biggest strength.

“I am more mature today, so I deal better with the mistakes than the many times when I locked myself away and wanted to be alone,” he said.

“But if you look at my professional history as a goalkeeper, I am not somebody who makes many mistakes. My game is characterized by consistency.

“That is what has brought me to Liverpool. I like to make simple saves. I don’t make saves for the camera. If the ball is in front of me, I won’t dive. If it’s to the side of me, I will dive to the side.

“My saves are not to show off or Hollywood saves for the camera.”