‘Easy work’. ‘Cool as you like’. ‘About as comfortable as a game against Barcelona can be’.

Those are all things that you could say about Chelsea’s 2-1 dispatching of Barcelona in their pre-season friendly at the Saitama Stadium in Japan.

But enough about what people have said. What did we learn?

Well, with all the obvious caveats about the meaninglessness of pre-season, here’s what we know about the likely Premier League champions and the La Liga stragglers-to-be following this pulsating encounter. Or is he? I don’t actually know yet. Which probably makes this a bad start for a ‘things we learned’ piece, but oh well.

Yes, Abraham got a goal on his first start of the pre-season, and it was a well-taken one at that, taking it from his left foot to his right in one swift movement to beat Marc-Andre Ter Stegen.

But, moments before, he also missed an absolute sitter after some excellent work from Christian Pulisic (more to come on him), so it’s sort of TBD. Basically, he can finish chances he has time to think about, but not always the ones he doesn’t, maybe?

He’s certainly not the finished article, and questions still linger over his ‘big-six’ qualifications, but he’s got intelligent movement and isn’t afraid to rough it with the big boys, even if sometimes he can come out second best. 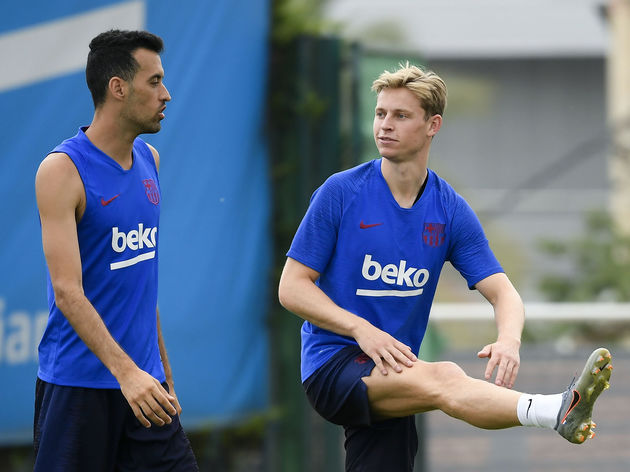 Sergio Busquets is washed. He’s a fraud, he’s probably balding, and he’s no longer fit to wear the Blaugrana shirt.

These are all possible takeaways from the midfielder’s incomprehensibly uncharacteristic error that gifted Abraham that opener, especially after the season of perceived decline he suffered last campaign.

Or maybe he was just particularly jet-lagged? Either way, yes, we will be talking about the man next to him in the above frame. Just wait a bit. Slowly but surely, Chelsea’s tactics under Frank Lampard are emerging. With another deployment of 4-2-3-1, it looks like that may be his preferred formation, though N’Golo Kante’s enforced exit from the tour means we are yet to see the Frenchman take his place in that anchoring two.

Away from formational concerns, the Blues seem to have retained their high press, as well as a propensity to pass out from the back, though their build-up play is a bit more direct. Also, without Eden Hazard, their playmakers seem a bit more fluid and interchangeable – which is very 2019 of them.

4. Signs of a French Connection Brewing Neither may have been wholly at the races, but in Antoine Griezmann’s first start in Barca blue and red, there were signs of a promising French Connection brewing with Ousmane Dembele.

While their collective finishing was erratic, their occasional interchanges were impressively sharp, and their work in the national team has clearly fortified a strong knowledge of each man’s respective games.

5. Christian Pulisic Is a (Profligate) Live-Wire Again, much of this is conditional on reputation (e.g. Griezmann was far more profligate than the Yank, but he’s Antoine Griezmann so, you know), but Christian Pulisic looks like a quality player… who can’t yet finish his dinner.

But, seeing as it’s pre-season, we’ll gloss over the misses, and concentrate on the acts of backside-raising beauty – which is quite the feat during an 11:30 KO – because it’s hard to think of a more entertaining moment in the game than the myriad of times the American darted past and in-between his Spanish opponents.

In full flight, he is a sight to behold, and he’ll certainly catch out a few Premier League defenders with his pace and guile. It’s just whether he can capitalise that remains the mystery, as of yet.

6. There’s a Lot of Pressure on Frenkie de Jong Here he is, the Dutch Saviour! And he’s ready to take over from the ailing fraud also known as ‘Sergio Busquets’, or at least he better be!

Because, as you can tell from this (pre-season) scoreline, Barcelona’s midfield is desperate for some reinforcements and, despite Oriol’s best efforts, the last thing they need is another member of the Busquets family (FRAUDS, the lot of ’em) plugging the hole.

No, they need a Dutch wizard. They need the love child of Johan Cruyff and Nigel de Jong, and they need him fast. To be fair, starting with a pass completion rate of 100% from 42 appearances as a substitute isn’t terrible, is it?